According to Beck, ABC set out to investigate lawsuits as a result of the Telephone Consumer Protection Act (TCPA), the effect this law has had on the American economy and to hear the collection agency’s side as to how the TCPA has impacted the industry. As a part of its story, reporters researched law suits involving the TCPA and companies dialing wrong numbers. During their investigation they came across several law suits against large firms, including collection agencies, and they reached out to interview opposing sides about these cases.

According to Beck, his firm was the only collection agency that agreed to participate in the story. He told insideARM.com that ABC wanted to interview his firm regarding a wrong number case that DCI had in Tampa.

“They reached out to me and asked me if I would talk about the TCPA from the industry’s point of view and I immediately agreed,” said Beck. “The interview was based on several topics including this law suit we had for dialing a wrong number, the TCPA and the impact it has on the financial services industry, and the overall challenges we face in this litigious environment of credit and collections.”

“I took this opportunity as a chance for the collection industry to be heard on a stage bigger than ever before.” Beck said he has full confidence that ABC will be fair and show both sides of the coin, but understands the risk that his interview may be edited to present the industry or his company in an unfavorable light.  However he explained he and his company were willing to take that risk in order to present a positive example of how much more good than bad [the industry does], the challenges of the TCPA and why it is absolutely imperative that the FTC modernize that law, and how the stereotypes of collection agencies are just plain wrong. 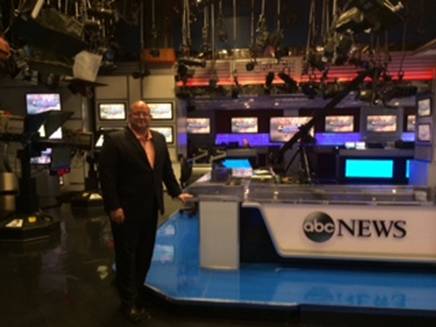 Following the interview, an ABC film crew came to DCI offices to film the atmosphere of their call center. Beck described that their camera man seemed astonished at the fact that they were not a sweat shop with angry faces everywhere and that a collection agency could be so positive and fun while doing such a difficult job.

Beck says he is cautiously optimistic that the story will air with some representation of the positive side of the industry.

The segment is currently scheduled to run on ABC World News with Diane Sawyer at the end of this week or early next week, but that is subject to the many significant world events unfolding as we speak. insideARM.com will post a notification once we become aware when the story will run, or will post a link to the segment after it airs.