Here's some positive news amid what has undoubtedly been a long and difficult couple of weeks for everyone. Laying to bed a long headache to debt collectors and their legal counsel, the Third Circuit issued an en banc decision in Riccio v. Sentry Credit that overturns Graziano and finds that there is no written dispute requirement in section 1692g(a)(3) of the Fair Debt Collection Practices Act (FDCPA). Over the past two or so years, plaintiffs and their counsel within the Third Circuit's jurisdiction brought high volumes of litigation arguing that a validation notice that tracks the statutory language of 1692g violates the FDCPA. The era of the written dispute requirement claim is now over—the decision also applies the ruling retroactively to any claim still open on the issue. 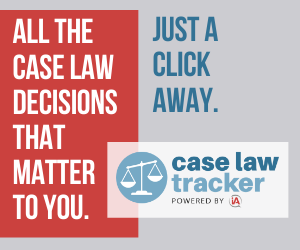 In its decision, the court observes that the current environment supports overturning Graziano. United States Supreme Court precedent since the Graziano decision—decided in 1991—has consistently taken a strict "plain meaning" statutory interpretation approach, including with FDCPA cases. The plain language of the FDCPA clearly foregoes the term "written" in section 1692g(a)(3), but contains the term in other sections. Accordingly, the court concludes that Congress meant what it said.

The court also notes the circuit split on the issue. It states that it is the "legal last-man-standing" as the other Circuit Courts of Appeal have all ruled that a written dispute is not required under section 1692g(a)(3).

The most poignant reasoning cited by the court, however, is that the consumer's—and thus, her counsel's—request to continue following Graziano would actually limit a consumer's choice and ability to dispute a debt, and thus hold her back from many protections, which is contrary to the policy of the FDCPA. The court states in a footnote:

[I]t bears noting that purposively reading the FDCPA underscores our textual conclusion. At bottom, expanding the ways a debtor can dispute a debt’s validity makes it easier for debtors to invoke its protections. So demanding written disputes not only flouts the FDCPA’s text—it also hoodwinks the Act’s purpose.

By expressing our view today, we put an end to a circuit split and restore national uniformity to the meaning of § 1692g.

And, in order to put an end to this saga, the court provides protection to any debt collectors who included a written dispute requirement into their validation notice in reliance upon Graziano:

We do not suggest that debt collectors who sent Graziano-compliant letters before today will be on the hook for failing to foresee our change in the law. Just as collectors who act “in good faith in conformity with any [agency] advisory opinion” cannot be liable if that “opinion is amended, rescinded, or” judicially invalidated, § 1692k(e), collectors should not be penalized for goodfaith compliance with then-governing caselaw. To that end, we note district courts can withhold damages for unintentional errors, § 1692k(b), award no damages for trivial violations, § 1692k(a)(1), and even award attorney’s fees to the collector if the debtor’s suit “was brought in bad faith and for the purpose of harassment,” § 1692k(a)(3). We have confidence in district courts to exercise that discretion appropriately.

The court ends with a bang, and what industry has argued all along with these claims:

A collection notice can never mislead the least sophisticated debtor by relying on the language Congress chose. And since that’s all this notice did, Sentry Credit did not violate § 1692g.

At long last, the circuit split is over. Motions to dismiss should be filed on any outstanding claims related to this issue, and—if we could be so bold as to suggest—motions for sanctions should be filed against plaintiffs' counsel who bring or continue to prosecute any such claims, as the Third Circuit very clearly and conclusively shut the door on this issue.

There are distinct members of the plaintiff's bar who take advantage of this, and flood debt collectors with hundreds, if not thousands, of nearly identical lawsuits with the hope that the collectors will settle since they cannot afford to defend each and every claim. I'll bet legal counsel within the industry could list them by name, due to the prevalence of this practice. This means that not only are collectors liable for their own defense fees even if they succeed on the merits, they also spent obscene amounts on legal settlements—in this particular circumstance, this money was spent in order to preserve the consumer's right to dispute orally. For every case that a debt collector chooses to defend, there are likely tens—if not hundreds—that are resolved via settlement. insideARM previously wrote about this litigation dilemma.

The kicker is that most of these high-volume, nearly-identical lawsuits are filed as purported class actions—but each purported class representative falls within the class definition of all of the other class actions. It'd be one thing if these lawsuits were brought against activities that cause actual harm to consumers, but instead, they are hyper-technical "lawyer's cases," as the Eastern District of New York previously noted.

Take, for example, this written dispute requirement line of cases. What happened here? A consumer—likely driven by her counsel—was trying to limit consumer protections under the FDCPA by limiting how consumers can dispute their debts. This was despite the fact that disputes of any form, including oral, can trigger many protections for consumers outside of just validation of debts, e.g. the requirement to note the dispute when credit reporting.

Note that here, it was the consumer and her counsel—not the debt collector—who appealed a district court decision that said she had the right to dispute orally and tried to get that decision reversed. LET THAT SINK IN FOR A MOMENT. Is the consumer's—and her counsel's—position really helping consumers? Whose side are these folks on, anyways? I'll leave that as a rhetorical question, but we all know that settlement money went somewhere.

Andrew Blady, General Counsel and Chief Compliance Officer at Spring Oaks Capital, LLC, who was previously on the defense team for this line of cases, adds:

This was a long, but necessary battle that I was glad to be an advocate on behalf of our industry on. The Third Circuit came to its senses, refusing to penalize debt collectors for simply following the statute. It was unfortunate that some consumer attorneys were actually advocating to make it harder for consumers to dispute a debt at the expense of the same people they claim to champion. Shame on them. The Third Circuit got this one right.

Want to be the first to learn about and track trends on industry-impacting claims like this? The iA Case Law Tracker can help you do that in less time than it takes to pour your morning cup of coffee.

Next Article: Illinois Regulator Issues Guidance to Collectors and ...

How the Pandemic Changed Consumer Behavior and How Those Changes Will Impact Your Operations Session 1: Setting the Table

How the Pandemic Changed Consumer Behavior and How Those Changes Will Impact Your Operations Session 2: Staffing Challenges

How the Pandemic Changed Consumer Behavior and How Those Changes Will Impact Your Operations Session 3: Adapting & Planning Ahead

When Each Call (and E-mail) Count: Meeting the CFPB 7x7 with Intelligent Contact Data