On last night’s episode of “Last Week Tonight with John Oliver” on HBO the host dedicated the entire show to absolutely skewering the debt-buying industry. Click here or on the image below to watch the episode. 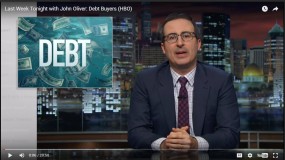 To those unfamiliar with Oliver and his show, the host is part comedian, part political/social commentator.  In each episode Oliver will typically dedicate the entire show to a single topic and use a satirical, “over-the-top” approach to look at and comment on news, politics, and current events. Oliver has recently done shows on other industry-related topics, including predatory lending and student loan debt.

Oliver and his staff clearly did a significant amount of research and preparation for the show. He identified all of the issues that are commonly raised when criticizing the debt buying industry.  From multiple re-sales, to lack of transferred account data, to large financial institutions selling portfolios “As is” and “With all Faults,” to sales of accounts where a bankruptcy had been filed or where an account had been previously paid or settled, to “Zombie Debt,” Oliver highlighted the well-publicized problems with the industry.

To make his point, Oliver played several recordings of out-of-control collectors. He played a video clip of an FTC official highlighting the fact that the agency receives an incredibly large number of complaints about debt collection and debt buying. He mentioned the FTC case against Williams Scott & Associates. He discussed the heavy use of litigation by debt buyers, and he highlighted issues identified in the recent CFPB settlement with the Pressler & Pressler LLP law firm.

Oliver declared, “Debt buying is a grimy business, and it badly needs more oversight. As it stands, any idiot can get into it. And I can prove that to you, because I’m an idiot. And we started a debt-buying company. And it was disturbingly easy.”

Oliver revealed that back in April he “spent $50” online to start a debt-acquisition company.  He set up an organization called Central Asset Recovery Professionals (or CARP, for the bottom-feeding fish).  He then bought a portfolio of approximately 90,000 out-of-stat medical debt accounts with a face value of $14,922,261.76. OIiver claimed he paid approximately $60,000 of for the portfolio. “For that amount, CARP would be sent the personal information, including names, current addresses, and Social Security numbers of nearly 9,000 people,” Oliver said. So CARP bought it.

At the end of the show, Oliver pulled off a publicity stunt to hammer home his point. Instead of making any effort to collect the purchased debt, Oliver gave the entire portfolio to RIP Medical Debt (RIP) (www.ripmedicaldebt.org/) Per Oliver, RIP is a non-profit corporation “dedicated to forgiving medical debt with no tax consequences for consumer.”

RIP Medical Debt, Inc., was founded in mid-2014 by two former collections industry executives, Craig Antico and Jerry Ashton. Having worked for decades in the medical field, the two were acutely aware of the number of Americans who shoulder the burden of unpaid medical debt, and the enormity of that debt. They also knew that they were uniquely qualified to help. Using their experience and connections within that world, they developed a strategy to aggressively tackle this scourge.

Essential to that strategy is the generosity of individuals, foundations and corporations. With their donations, RIP searches out distressed medical debt in the collections industry and within the community of medical providers, including hospitals and medical practices, and offers to buy this debt. But, for pennies on the dollar, which is how RIP is able to make such a significant impact. $50 can buy as much as $5,000 in medical debt. $1,000,000 can buy $100 MILLION in debt!

Once this debt is in our possession, it is abolished as a gift from RIP to the patient. No strings attached. A gift made possible by complete strangers. People, bailing out people.

Oliver then, with great hype, proceeded to claim his show was “giving away” $15 million, double the value of the infamous Oprah Winfrey car giveaway, making it the largest television giveaway in history.

Oliver used extreme examples of bad behavior to make his point. While he did admit that there were good actors in the debt buying industry, any information about those businesses and good behavior would not have fit the message he wanted to convey.

The ARM industry in general and the debt-buying industry in particular continue to have a significant PR challenge.  It is something that will probably never go away. We expect official reactions from the industry trade groups in the coming hours or days.

Worth noting is that insideARM receives inquiries from time to time from individuals interested in getting into the debt purchasing business, and wondering how to do so. We typically make it clear that there are significant compliance hurdles to operating properly, and refer them to DBA International, which has created an extensive certification program.