The third-party debt collection industry returned some $45 billion to creditors and other clients in 2013, according to a study released today by ACA International. The report, based on a survey and other statistical analysis by Ernst & Young, is the latest in a series of comprehensive industry studies.

ACA began its economic impact studies in 2004 when it commissioned PriceWaterhouse Coopers to conduct a thorough analysis of the role third party collections plays in the broader U.S. economy. The report released Tuesday is the fourth since then, providing a fascinating look at the evolution of the ARM industry over the financial collapse, recession, and recovery.

In 2013, third-party debt collectors recovered $55.2 billion from consumers on various debt accounts. The agencies kept some $10.4 billion as payment in the form of commissions and fees, returning nearly $45 billion to clients.

The 18.8 percent aggregate commission/fee rate was roughly unchanged from the last study, covering 2010. But it is down significantly from the rates enjoyed by the ARM industry before the recession:

Accounting and audit firm Ernst & Young compiled the report based on the results from a survey taken by about 300 collection agencies and public data from the U.S. Census and The North American Industry Classification System. The survey provided some interesting insight into the types of debt being recovered by collectors. 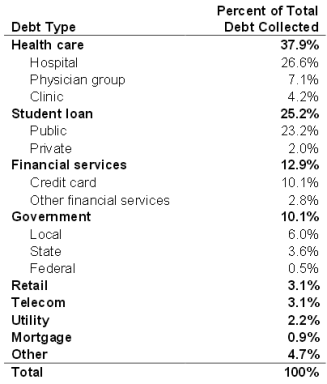 Medical debt is the leading category of debt types collected in the third party system, comprising nearly 38 percent of dollars collected. Student loans are next at 25 percent followed by financial services at 13 percent, as shown in the table to the right taken directly from the report.

The study also examined the positive impact of collection agencies in other areas. Third-party agencies and their employees paid $724 million in direct federal taxes in 2013 and $687 million in direct state and local taxes. The industry was also responsible for some $130.5 million in charitable giving in 2013, up significantly from the $85.2 million reported for 2010.

[Update: Read the latest version of the ACA International Ernst & Young study, from 2017]